The new golf carts at a course in Ohio are a bit different than the old ones—for one thing, they fly. 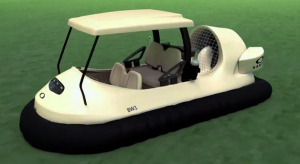 Most golfers dread hitting a water hazard, or hate to maneuver their golf carts around sand traps and other obstacles. But not the golfers at the Windy Knoll Golf Club in Springfield, Ohio. This summer, the course is unveiling two new hovercraft golf carts for their customers to use instead of the more conventional golf carts.

Windy Knoll will become the first course in America to offer BW1 Hovercraft Golf Carts. After seeing a video of PGA tour veteran (and 2012 Masters champion) Bubba Watson buzzing around in a prototype, the club’s management decided that hovercrafts were the future of golf, and that the future is now.

Watson helped Neoteric Hovercraft develop the idea for the BW1 after becoming frustrated with the limitations of normal carts. Each BW1s sells for $58,000—which seems pretty expensive for a golf cart…but extremely cheap for a hovercraft. While that might still give the golfing community sticker shock, the hovercrafts cause far less damage to courses than normal carts. The “footprint” of each vehicle is 33-times lighter than a human foot and, needless to say, much less destructive than wheels. They’re also capable of gliding above water hazards and sand traps, which would put a normal golf cart out of commission. On the other hand, the hovercrafts are larger than golf carts and require more maintenance, which is probably why Windy Knoll is charging $230 to rent one for a single round.