We’re going to Diggerland! Here are three of the newest and most unusual amusement parks in the world. Details: When Ilya Girlya visited Diggerland in the United Kingdom he figured that a similar park could become incredibly popular in the United States. “Who doesn’t want to tinker with construction equipment?” he later told the press. “It’s like playing with big Tonka toys.” Fortunately, he and his family own a huge construction company so he had the resources to build his own version in New Jersey. Diggerland USA opened in June and offers visitors 23 attractions…all built out of modified construction machines like diggers, tractors and backhoes. There’s even a carousel ride for little kids called the Dig-A-Round.

Details: This theme park isn’t the first one in the world to be based on a still-functioning movie studio. Alas, Cinecittà Studios has fallen on hard times in recent years and it’s pretty far removed from its heyday when American filmmakers used it to make classic movies like Ben-Hur and Cleopatra. The $338 million park, Cinecittà World, (which is actually located on the former grounds of an entirely different movie studio about 16 miles away) hopes to restore some of its lost luster with attractions based on classic Italian films. Some of them are pretty weird. Visitors enter the park through the “nightmarish jaws” of the Temple of Moloch from Cabiria, a 1914 silent movie. According to the park’s website there’s also a “family friendly” roller coaster based on Dante’s Inferno. 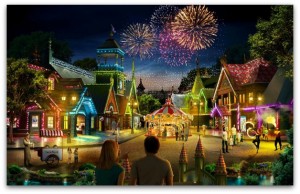 Details: The 2014 Winter Olympics cost Russia billions and left the country with a costly real estate development in Sochi that was only used for a few weeks. Instead of allowing the city’s new hotels to sit empty, officials came up with another idea to attract future visitors to the area: a theme park. They had hoped that Sochi-Park would be up and running in time for the Olympics but its grand opening was delayed until June. Nicknamed “Russian Disneyland, it’s the largest theme park in the country. In addition to boasting the biggest hotel complex in Europe, Sochi-Park contains several amusement park rides and roller coasters. There’s also, for some reason, “folk craft centers” where visitors can learn blacksmithing, soapmaking, and puppetry.