Ask Uncle John Anything: Blue By You

Where does the phrase “blue haired ladies” or “blue hairs” to describe prim and proper older woman come from? 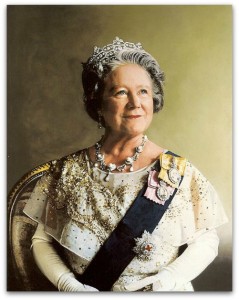 No, you weren’t born so late that you missed a time period in which senior citizens dyed their hair strange, shocking, or unnatural characters like they were punk rockers or Marge Simpson. From the 1930s through to about the mid-1970s (or so), it was common to see women with silver hair streaked or dotted with blue.

The product used was called a blue rinse, a dilute hair dye. Brands like Roux and Fanci-Full promised to turn gray or white hair, which can often adopt an undesirable yellow hue, into something more attractive. If it was done correctly, it gave graying hair a distinguished silvery tint, something close to the platinum blonde color of classic Hollywood movie stars like Jean Harlow. It was also favored by Queen Elizabeth the Queen Mother. When applied poorly, as it was often done, it turned hair blue, purple, or bluish purple.

The phrase isn’t as well known in the U.S. anymore, or for the last 30 years or so, with the widespread use of more effective hair dyes that give formerly white or graying hair a more natural brown, black, or blonde appearance. In England, however, the phrase “blue hairs” isn’t used in favor of “blue rinse brigade.” While few older English people still have blue hair, it’s a “dyed in the wool” reference (pun intended), and a negative one at that, to describe older, middle-class conservatives…and it’s not the least bit affectionate. If it’s used, it’s meant to ridicule older people for their out-of-date values as well as their cosmetic choices. The last chain in the Western world to carry blue rinses was Asda, and it stopped selling them in 2006 due to low demand.

My aunt Fernande always had blue hair for as long as I remember until the day she died. I guess she did not use the product properly …