The real-life story of a cartoon character’s favorite implement of injury.

An anvil, as you may have surmised from the sound it makes when it crashes down on Wile E. Coyote’s head, is a solid block of steel or iron. The anvil is used in metalwork, and usually has a flat top, called the face. The most common design, which became common in the 1800s, is called the “London Pattern.” In that case, there’s a pointed horn at the front, a step up to the face, and a flat back or heel on the other side, with a couple of holes toward the back. (They are not made by the ACME Corporation.) In order to use the anvil, a blacksmith attaches the anvil to an immobile surface, as the inertia of the anvil is what helps to transfer the energy of the hammer onto the piece of metal that’s being forged. 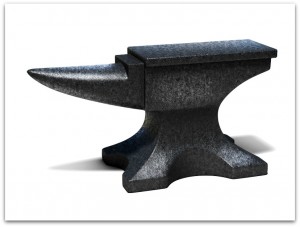 Anvils are among the oldest tools still in common use. They’re so old, we’re not even sure who used them first. They’re mentioned in ancient Greek and Egyptian texts, and can be found in Mongol history, as well. Some say metalworking, which required an anvil of some form or another, began in the area of what is today Turkey and Iran sometime around 6,000 B.C. Some of the oldest anvils appear to be found pieces of meteorites, which were incredibly hard because they comprise mostly iron. Anvils have evolved over time from stone slabs to bronze, then wrought iron or iron with a steel face.

Blacksmiths want an anvil that is “lively.” A lively anvil causes a hammer to bounce back after each blow. In his book A History of Anvils, Sam Moore says the best test of an anvil is “to drop a one-inch ball bearing on the face from a height of 18 inches. If the bearing bounces right back into your hand the anvil is one of the better ones and will be easy to use.”

They were used as a cartoon gag because they were highly recognizable by early 20th century American audiences, which were familiar with more familiar with manufacturing and industrial tools than audiences are today. Today’s audiences familiarity with anvils? It’s from, ironically, old cartoons.