3 Easter Bunny Alternatives From Around the World

Not every country gets their Easter goodies delivered by an ultra-intelligent rabbit. Like the rest of the Northern Hemisphere, Easter arrives at the beginning of Spring in Switzerland. Easter and Spring are wrapped up together, but that country’s symbol of growth and rebirth isn’t the bunny—it’s the cuckoo bird. (It makes more sense for eggs to come from birds than bunnies, right?) Swiss children fill their baskets on Easter morning by hunting for colored eggs and chocolate eggs left by the Easter Cuckoo. Cuckoos are much more prevalent in Switzerland anyhow—it’s the origin place of the cuckoo clock, after all. The bilby, or rabbit-bandicoot, is a rodentlike marsupial native to Australia. They kind of look like rats with big bunny ears. And while that might sound terrifying or weird to an American child, it’s the Easter Bilby that brings Easter Sunday treats to Australian children. Simply put, rabbits are not popular in Australia. They were introduced to the continent in the 1800s and destroyed thousands of acres of crops…so they aren’t exactly a sign of growth and rebirth. 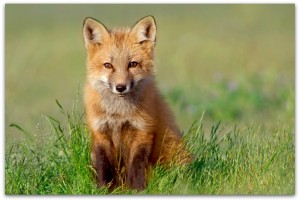 Up until a few decades ago, the iconic Easter animal of Germany was the Easter Fox (or Osterfuchs). The Easter Bunny took hold there, but the German tradition goes like this: on the day before Easter, German children could make a nest of moss and hay for the Fox, and would place their pets in a locked room so as not to disturb the magical creature. In the morning: treats!