Today is National Beer Day, a perfect time to pre-order Uncle John’s next book…Beer-Topia. It’s a heady brew of beer miscellany, and here’s an exclusive taste. Taste is entirely subjective, and one man’s swill is almost always bound to be another man’s refreshing pleasure. That said, Hop’n Gator Beer sounds so disgusting that it’s hard to believe it was ever actually a thing. The brainchild of Gatorade inventor Dr. Robert Cade, this justifiably short-lived beverage blended Cade’s popular lemon-lime sports drink…with beer. Essentially a Gatorade shandy, it was only bottled for a few years, from 1969 through 1972. Years later, the Iron City Brewing Company tried bottling their own version (a citrus malt liquor) before being sued into submission by Gatorade.

The most brilliant ideas are often the simplest, and the Golden Beverage Company’s late, lamented Nude Beer is a perfect example of that principle in action. This ‘80s-era brew came bottled with a label picturing a lovely swimsuited lass whose minimal attire was made out of the same flaky metal stuff that covers scratch-off lottery tickets…and would therefore vanish completely when rubbed off with a coin or fingernail. It was interactive, it required physical exercise, and it encouraged the appreciation of beauty; unfortunately, it also ran afoul of many local decency laws, making it difficult to distribute or effectively market in many areas. 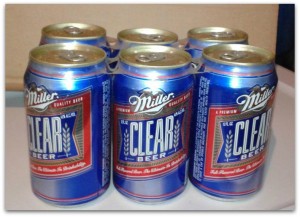 The clear drink fad of the early ‘90s is chiefly remembered for spawning the persistent beverage punchlines—and marketplace flops—Zima and Crystal Pepsi. But if test market drinkers had just been a little more enthusiastic, we might have been treated to something even sillier: Miller Clear, a 4.6% ABV brew that The Independent described as looking like 7-Up and tasting “like a sweetened seltzer with the faintest touch of oily, medicinal hoppiness.” Miller execs steadfastly denied that they were trying to hop on the transparent-beverage trend, insisting it was simply the accidental result of some distillery tinkering that produced what the ad campaign somewhat perplexingly promised was “good beer-drinking beer.” Clearly, sales told a different story—like Crystal Pepsi, clear beer didn’t make it past 1994. 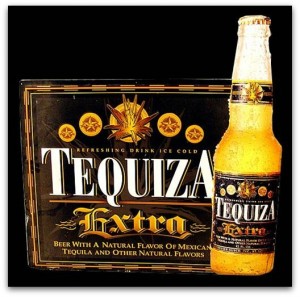 One of the more high-concept experiments ever to tumble out of the Anheuser-Busch chute, Tequiza was billed as “beer with blue agave nectar and a natural flavor of imported tequila and lime.” This description was just misleading enough to lure wacky-product enthusiasts into purchasing a random six-pack in the mistaken belief that they’d be drinking tequila-laced beer. It was really just slightly citrusy pale lager, like a Corona, but with lime already in it. But that was enough to keep it lingering in stores from 1998 to 2009, at which point it was phased out in favor of the considerably more male-friendly Bud Light Lime.

Leinenkugel makes a good line of shandies, some year-round, some seasonal. And Shiner’s Ruby Redbird is made w/ Texas Ruby-red grapefruit. Definitely NOT Inbev.

Tequiza is still good. It simply benefits from an added shot of tequila.