National Lampoon’s Animal House was released 40 years ago this summer. Here are some things you probably didn’t know about the classic college comedy. 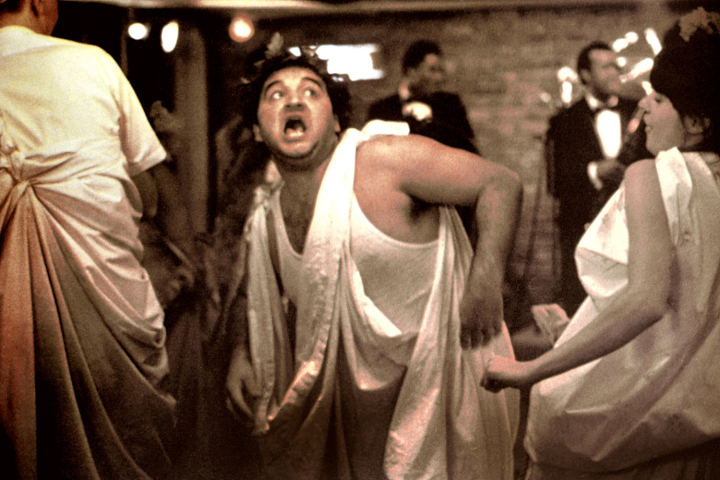 Among the cast of young, relatively unknown actors playing fraternity guys in the movie was Saturday Night Live star John Belushi as Bluto. His SNL castmate Chevy Chase was almost in the cast, too. The role of smug and clever Otter (ultimately portrayed by Tim Matheson) was written for Chase, but director John Landis thought multiple SNL stars would take the audience out of the movie.

Other SNL vets that didn’t make the cast

The film as written by National Lampoon magazine writers Chris Miller, Harold Ramis, and Doug Kenney. Among their other initial casting choices, which Ramis wouldn’t have gone for, included SNL vets Dan Aykroyd as biker D-Day and Bill Murray as Boon.

Belushi’s performance is largely silent—he has very few lines. Landis did that on purpose—taking almost all of his lines out of the script, forcing Belushi to rely on physical comedy and facial expressions.

The University of Oregon stood in for the film’s fictional Faber College. It’s the only college that would allow filming, even of such a raunchy film. Reportedly, the college’s dean had rejected an offer to have The Graduate film on campus years earlier, and he didn’t want to get burned again. (Dean Wormer’s office in Animal House was that U of O dean’s real office.)

Otis Day and the Knights

The Isley Brothers’ classic “Shout,” was performed in the movie by a raucous band called Otis Day and the Knights. Actor DeWayne Jessie played Otis, and got so popular from Animal House that he still tours bars and clubs today as a musician under the name Otis Day.

Who didn’t get rich?

The film was unexpectedly successful, grossing $141 million on a $3 million budget—a record at the time for a comedy. Who didn’t get rich off the movie? Donald Sutherland, who played a cool professor. Producers offered him either $75,000 salary for a percentage of the film’s returns. He thought the movie would flop, so he took the 75 grand. Had Sutherland had faith in the film, he’d have made about $4 million.

The sequels that never happened

Two Animal House sequels never panned out. One would’ve featured a predominantly female cast and focused on a ramshackle sorority house and its wild residents, while another would have reunited the cast about a decade after the events of Animal House in San Francisco in 1967 in the “Summer of Love.”